The financial cost of adverse childhood experiences (ACEs) in Wales has been estimated to be equivalent to £2.2 billion a year 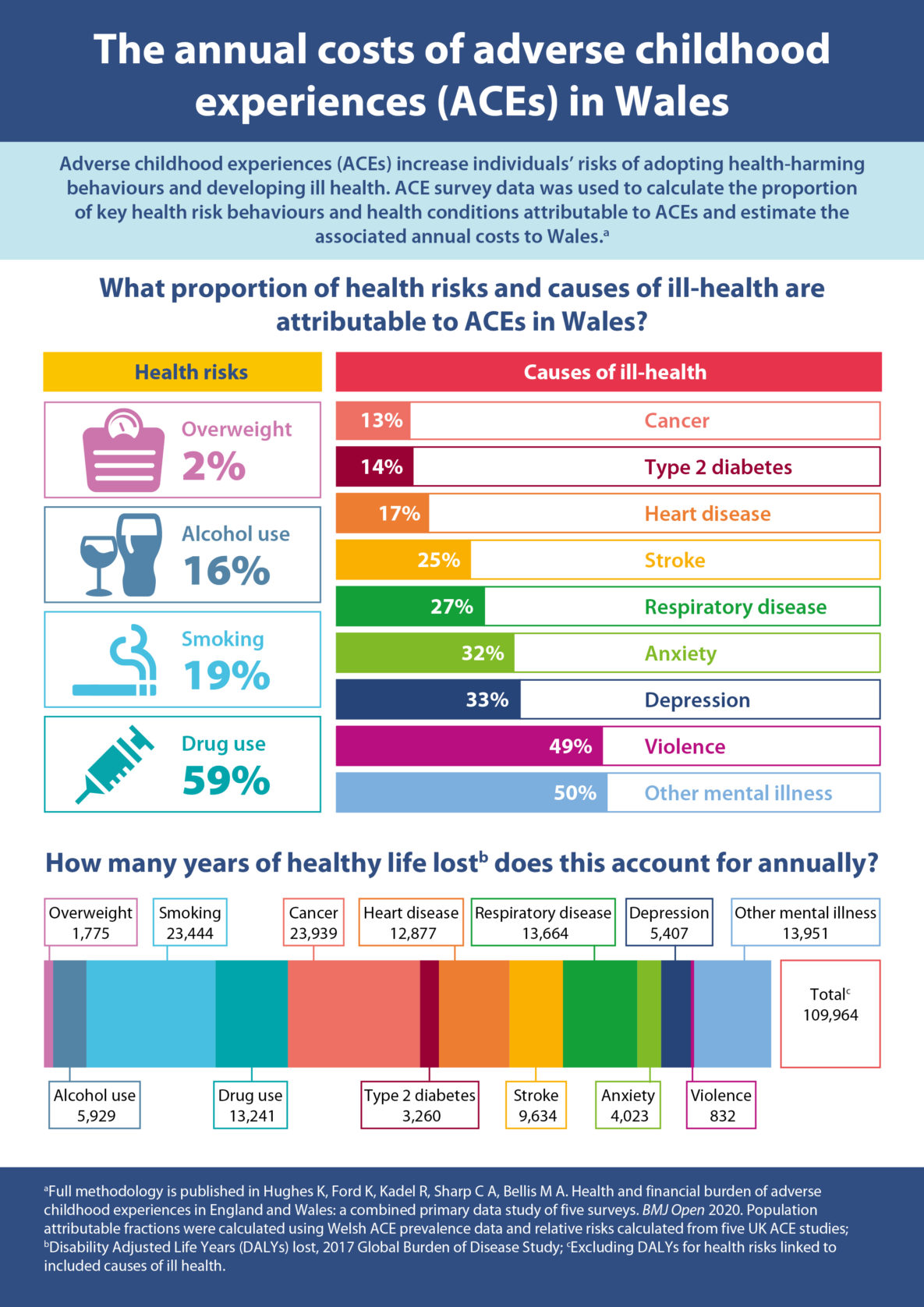 ACEs are stressful experiences occurring during childhood that directly harm a child (e.g. sexual or physical abuse) or affect them through the environment in which they live (e.g. growing up in a house with domestic violence). Children who experience ACEs are more likely to adopt health-harming behaviours as teenagers and adults and are at greater risk of poor health throughout their life - including having higher risks of developing diseases such as cancer, heart disease and respiratory diseases. They may also have greater needs for support from healthcare and other public services. Nearly half of all adults in Wales have experienced at least one ACE as a child and more than one in ten have experienced four or more ACEs.

A new infographic published following research by Public Health Wales and Bangor University shows the impact ACEs have on four health risk behaviours and nine health conditions in Wales. The research found ACEs were likely to be responsible for 59% of drug use, associated with a cost equivalent to £263 million per year. Around a third of anxiety and depression and half of other mental illnesses were also associated with exposure to ACEs, carrying a combined annual cost of £466 million. Further, 13% of cancers were attributable to ACEs, with an annual cost to Wales of £476 million. Two thirds (64%) of the costs of ACEs were accounted for by those who were exposed to four or more ACEs. The study estimated that a 10% reduction in ACEs in Wales would result in an annual saving of £161 million.

The full findings are published in the new infographic The annual costs of adverse childhood experiences (ACEs) in Wales and are based on figures originally published in Health and financial burden of adverse childhood experiences in England and Wales: a combined primary data study of five surveys. BMJ Open 2020 (Hughes K, Ford K, Kadel R, Sharp C A, Bellis M A). The infographic is being launched on Tuesday 9th February at theNational Four Nations Webinar Series 2021: Public heath approaches in policing and serious violence across the UK: the learning so far. 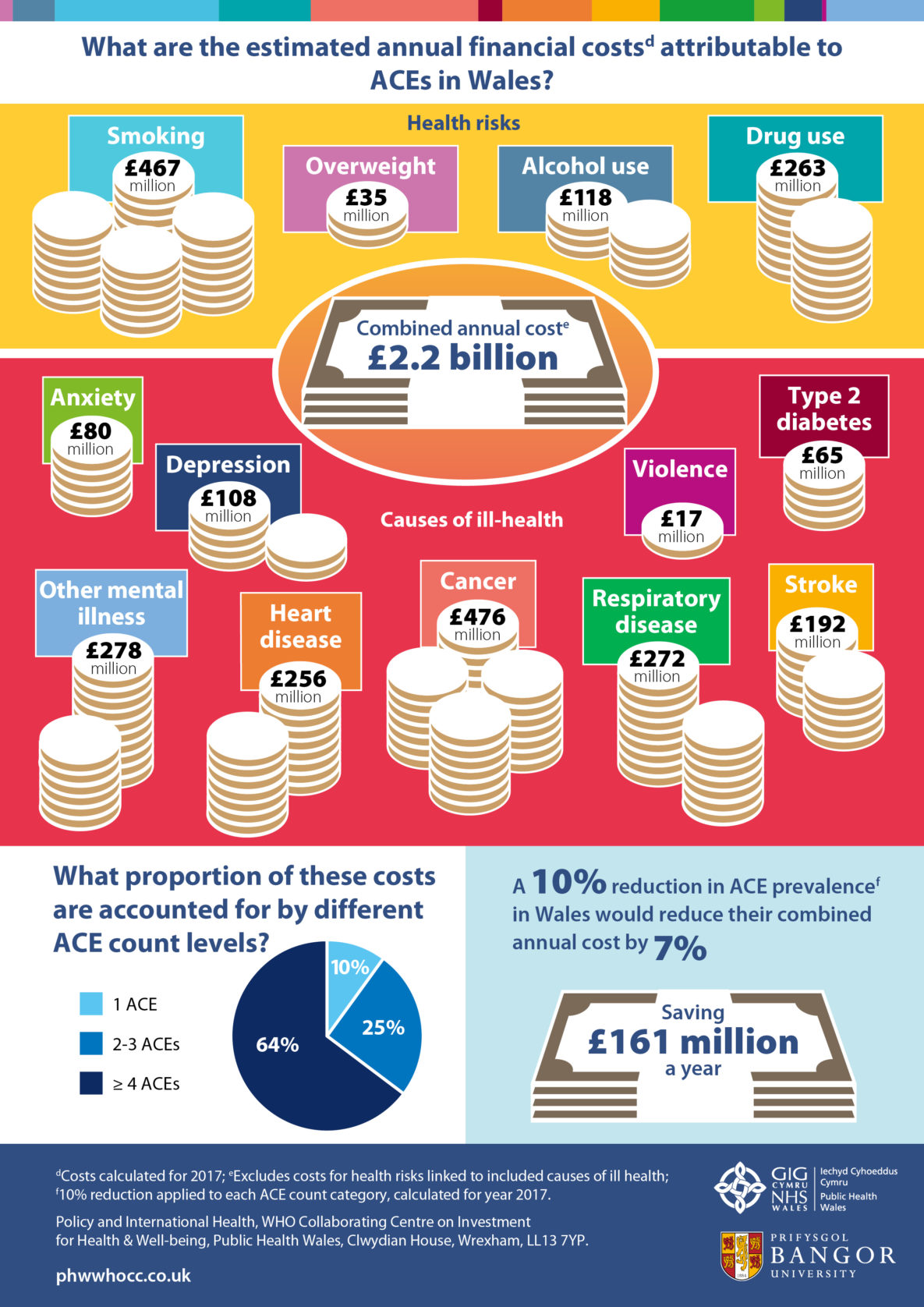 All children deserve a safe and nurturing childhood. However, many still grow up suffering child maltreatment or exposed to issues such as domestic violence in their home. The damage suffered by many of those children can affect their health and well-being even when they are adults and have left abusive homes. Preventing ACEs protects children and can help them adopt healthier, more social and economically more prosperous life courses.

Wales is an international leader in preventing ACEs as well as supporting those who have suffered them and has set up a national ACE Support Hub. However, it is especially important during the COVID pandemic that we all consider those children who may be trapped in abusive households, unable to interact with friends and cut off from support services. The COVID pandemic is a testing time for everyone but the repercussions for those currently unable to escape abuse and neglect may haunt and hurt some children for many years to come.

You can read more about the research here.

Read more of our latest news